Cameron Stephenson first joined the Conservative Party in 2016 and has been our Deputy Chairman Membership & Media as of September 2017. Cameron has lived in Morley all his life and worked in the White Rose shopping centre before going to University in Chester. He has now finished his Politics degree and is happy to be living full time in Morley again.

Cameron, who is a passionate Brexit supporter, is interested in political communication, using social media to advance political campaigns and reach out to local people, and maintaining the union within the United Kingdom. Cameron now works in Andrea Jenkyns constituency office as her Communications Officer. Cameron worked on Andrea Jenkyns’ 2017 General Election campaign and stood in the 2018 Local Elections in May for the Ardsley & Robin Hood ward, receiving 1610 votes aged just 21. He is a frequent campaigner and helps to act as a bridge between the association team and Andrea Jenkyns' constituency office team, helping to shape the focus of our local campaigns to what residents really care about.

Cameron is the candidate for the Morley North ward in the upcoming 2019 Local Elections, being held on May 2nd.

Our very own Morley & Outwood Association Officers outside CPC18 in Birmingham, wishing they could stay all week!

Peter Thompson, a Metallurgical Consultant at the Advanced Manufacturing Park in Rotherham, who until recently held the role of secretary within the local association. 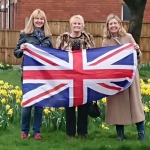 Nic was recently elected as a Councillor for Wrenthorpe & Outwood West in May 2018, and was appointed as Deputy Chairman Political in June 2018.

Keith Harrison is a businessman, and a passionate charity fundraiser.

Keith is excited to be involved with the Conservative party and concentrating his efforts within the Morley and Outwood area, he was elected Chairman in August 2019.