Cameron Stephenson first joined the Conservative Party in 2016 and was our Deputy Chairman Membership from September 2017 to September 2020. In the 2020 AGM Cameron was unaminously approved as Deputy Chair Political.

Cameron has lived in Morley all his life, and now works in Andrea Jenkyns' constituency office as her Office Manager and Communications Officer. Before attending University in Chester, he worked in the White Rose Shopping Centre.

A passionate Brexit supporter, Cameron is also an avid Unionist. He is also interested in political communication, and using social media to advance political campaigns and reach out to local people.

Our very own Morley & Outwood Association Officers outside CPC18 in Birmingham, wishing they could stay all week! 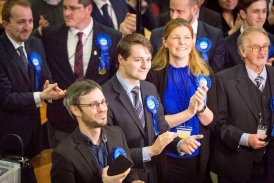