Again we would like to thank our members and activists who volunteered their time to campaign with us. Additionally, we would like to extend our thanks to the police, Council staff and the returning officer for running such a smooth election.

In Ardsley & Robin Hood, all of our team of three fresh voices received more votes than our previous attempts to take this ward, and we came close, within 116 votes of getting one of our team elected.

Thank you to everyone who voted in Ardsley & Robin Hood. Whilst we were not successful this time we are encouraged by this result and will be back next year to make another GAIN in Morley & Outwood! 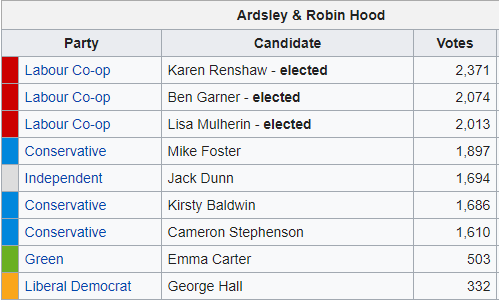 Additionally, in Stanley & Outwood East we had another exciting and close result, with an increase of 10.6% of the vote, we came just 470 votes from taking this ward from Labour.

Thank you to those who voted in Stanley & Outwood East, Again, we look forward to fighting to make this ward a third GAIN in Morley & Outwood!

Cameron Stephenson has been announced as a Conservative Candidate for Ardsley & Robin Hood, alongside Mike and Kirsty.

Kirsty Baldwin has been a member of the Conservative party since 2017, after becoming involved in politics when Andrea Jenkyns MP visited her sports therapy clinic in Morley.

Mike Foster was born in Epping in 1962. In 1979 at the age of 16 Mike joined the Royal Air Force and in 1985, during his time serving in the RAF, Mike moved to Yorkshire and worked at RAF Linton-On Ouse.